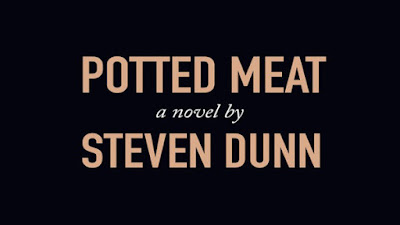 --TELL YOU A STORY

…It’s hard to put into words how remarkable Steven Dunn’s, “Potted Meat,” is and how much I loved it.  Though logging in at a slight 100 pages, it felt like a much longer trip, a very strange trip, yet a wonder nevertheless.


The novel decimated me many times.  I dog-eared or marked up nearly every page.  I reread scenes and sentences immediately after having read them the first time.  I marveled at the artistry, the cleverness and word play.  Dunn writes with authority, using slang when he feels like it—teevee, prolly, yall, muthafucka, suckas, cuz—and other times backing away from that in one deft pivot.  What is important with all great fiction is that the story rings true, and this book certainly does.  Reading “Potted Meat” makes you feel like a voyeur or displaced interloper.  However, on many levels I could relate to what the characters were going through even though the book is told through an African American’s POV and I am as white as skim milk.  Littered with equal parts brokenness and hopefulness, Dunn exposes us to a world very few people see:


A grandmother with a rifle who regularly shoots holes in the wall and slips in and out of dementia.


A grandmother with dementia, weaving in and out of the present, while having her butt wiped by a dutiful son.


Wannabe rappers who drop speed and chase it back with Bacardi.


A football coach who does eight balls.


Children who are more adult than their guardians.


Racial stereotypes turned on their head.


Each character Dunn has created is filled with agency, though their actions aren’t always noble and often times they backfire.  But through it all, we encounter scenes that are funny, crude, poignant, and sometimes shocking.  To be sure, the unexpected happens more than once.


There is nothing sanitized in Dunn’s book.  In fact he unapologetically shines a light on every sordid detail until you can smell the sour whiff of urine, the rank odor of rotting carcasses, lifting off the page.  There is decay everywhere—play grounds, buildings, relationships—yet they’re all rendered in such a way that they become oddly beautiful, if not also mesmerizing.


“Potted Meat” is as original a book as I’ve ever read.  There’s simply nothing like it.  It demands to be read again and again.
Posted by Len at 8:50 AM

Len
I write--short fiction, long fiction, poetry. I love writers and all things writerly, but really I love you, or I will love you if you let me. Please become a follower of this blog thingy I've got and I'll do my best to share tid bits that may or may not be of use, but will hopefully somehow be amusing. Life is better when we do it together, don't you think?